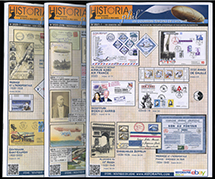 History of the «Editions Philatéliques Européennes»

1946 : Europe was just painfully emerging from the Second World War and our «Founding Fathers» already were undeavouring to unite its nations to put the devastated continent’s economy on its feet again. A new Europe was going to rise from the ashes of Nuremberg !

It’s in the course of that very year that my father, Paul Staedel, veteran of the French Resistance and a confirmed European at heart, was going to give shape to his passion for stamps by making philately his profession.

Initially, times were hard and two jobs were required to make ends meet.
Dad worked during the day as engineer at the Illkirch-Graffenstaden locomotive plant and mom took in sewing work.
At night, my parents prepared stamp collections and presentations to be deposited  for sale with the city’s tobacconists.

After the war, my parents often visited the Saar, at the time under French administration, to search for and then purchase newly issued stamps. Their main interest was in unearthing  its famous printing «varieties».

This first specialization gave rise to three Saar postage stamps study catalogues (Paul Staedel’s study-catalogues Saar I-II-III) which, with his catalogues on Europe (Europe Philatelie I-II-III) today are still a universal reference, all this leading my father to be appointed Philatelic Legal Expert with the Court af Appeal of Colmar (France).

In the meantime, the Council of Europe saw the light of day. The choice of Strasbourg as its headquarters represented for the Alsatians, having gone through the pain and sorrow of three wars and two actual annexations, the symbol of peace and reconciliation between the peoples of Europe.

A temporary post office was opened on the occasion of the Council of Europe’s Constituent Session in August 1949 at the the University of Strasbourg. My father then had the original idea of commemorating the Parliamentary Sessions of the first-ever European Organization by special mail editions.