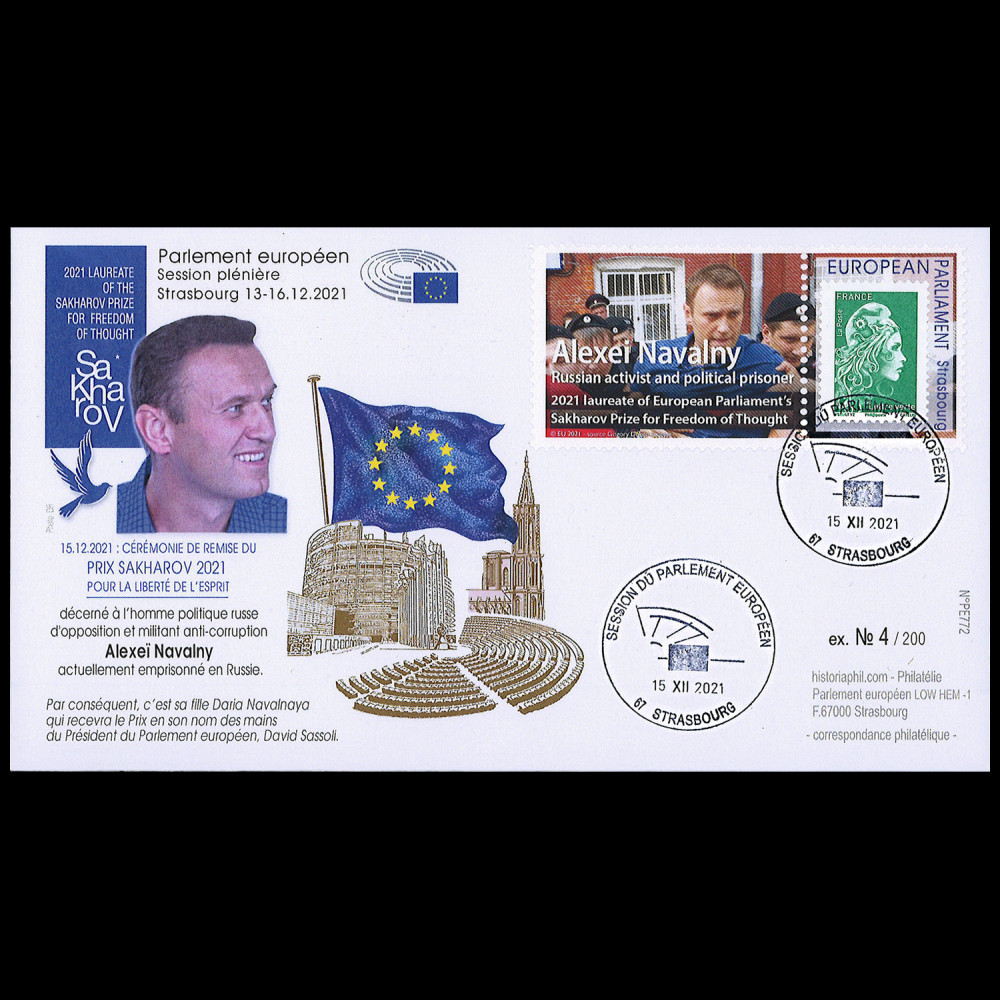 15.12.2021 - Sakharov Prize 2021. The award ceremony for this year’s Sakharov Prize for Freedom of Thought, is conferred upon Russian opposition activist Alexei Navalny, who is currently imprisoned in Russia.

Collector's Edition of only 200 numbered copies.

Alexei Navalny’s daughter Daria Navalnaya received the European Parliament’s Sakharov Prize on behalf of her imprisoned father at a ceremony on 15 December.

Currently serving a prison sentence in a forced labour colony in Russia, Alexei Navalny has been the country’s leading opposition figure for more than a decade, known for his fight against corruption and the Kremlin's abuses of human rights.

In his introductory words Parliament President David Sassoli praised Navalny’s courage: "He has been threatened, tortured, poisoned, arrested, incarcerated, but they have not been able to actually make him stop speaking... As he himself said once, corruption prospers where there is no respect for human rights and I believe he is right. The fight against corruption is also a fight for the respect of universal human rights. It is certainly a fight for human dignity, for good governance and for the rule of law,” said Sassoli, calling for Navalny's immediate and unconditional release.

Accepting the prize behalf of her father, Daria Navalnaya criticised those eager to appease dictators in the interest of pragmatism, insisting that Europe must remain true to its ideals: “When I wrote to my dad and asked, What exactly do you want me to say in the speech from your point of view?, he answered: 'Say that no one can dare to equate Russia to Putin’s regime. Russia is a part of Europe and we strive to become a part of it. But we also want Europe to strive for itself, to those amazing ideas, which are at its core. We strive for a Europe of ideas, the celebration of human rights, democracy and integrity'.”

Also present at the ceremony in Strasbourg were Leonid Volkov, Navalny’s political adviser, and Kira Yarmysh, Navalny’s press officer.
The other finalists for Parliament’s Sakharov Prize in 2021 were Afghan women fighting for women’s rights in their country and Bolivian politician Jeanine Áñez.

The Sakharov Prize for Freedom of Thought is awarded each year by the European Parliament. It was set up in 1988 to honour individuals and organisations defending human rights and fundamental freedoms. It is named after the Soviet physicist and political dissident Andrei Sakharov and consists of a certificate and a €50,000 award.

In 2020, Parliament awarded the prize to the democratic opposition of Belarus.
Info : www.europarl.europa.eu
PE772
50 Items