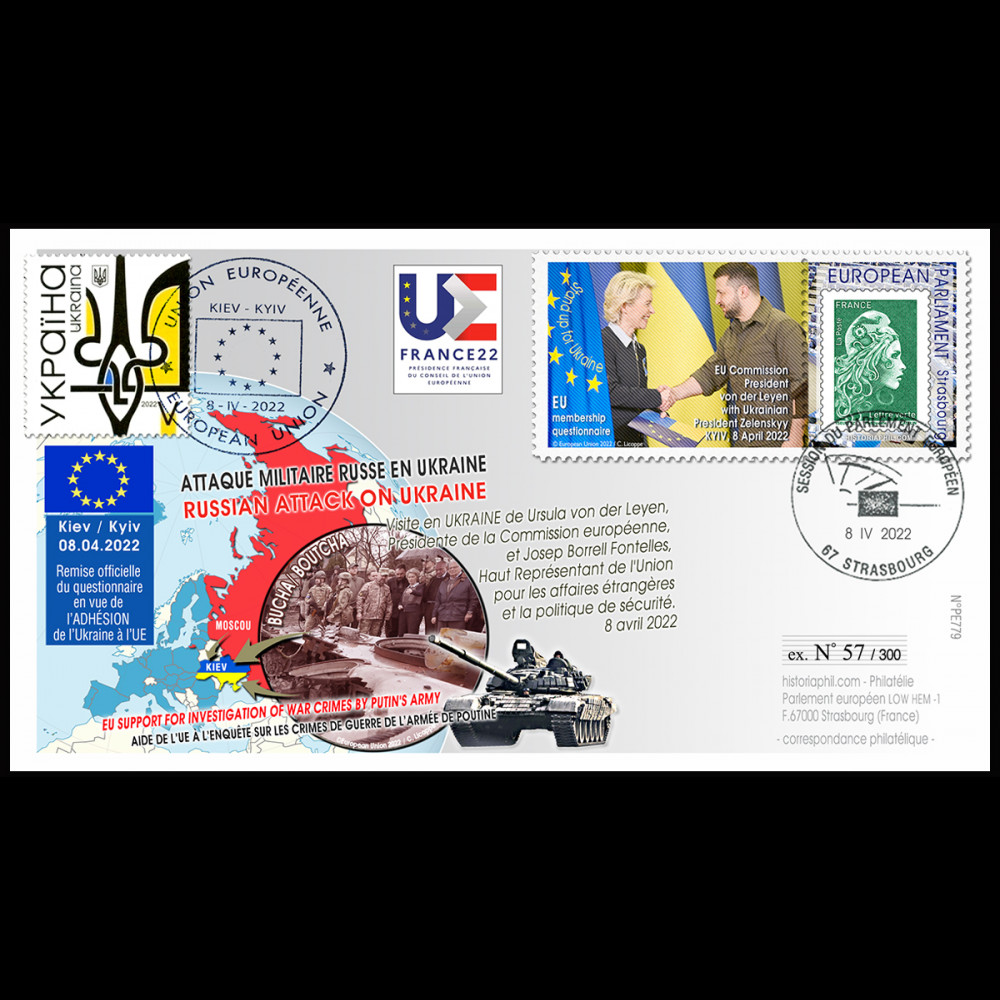 PE779: FDC twinning FRANCE (European Parliament, Strasbourg) - UKRAINE (Kyiv) "Kyiv, 8 April 2022 - VISIT TO UKRAINE by Ursula VON DER LEYEN, President of the European Commission and Josep BORRELL FONTELLES, High Representative of the Union for foreign affairs and security policy - Official presentation to Ukrainian President Volodymyr ZELENSKYY, of the questionnaire for UKRAINE'S ACCESSION to the EU - Meeting with the authorities of the city of BUCHA, after the Russian offensive - Help of the EU to the investigation into the WAR CRIMES of Putin's army"

illustration: Presentation by the President of the European Commission to Ukrainian President Zelenskyy, of the questionnaire on Ukraine's accession to the EU, map of Europe and the Russian military attack against Ukraine, Russian tank, meeting of Bucha, Logo of the French Presidency of the Council of the European Union 2022.

On 8 April 2022, Ursula von der Leyen, President of the European Commission, and Josep Borrell Fontelles, High Representative of the Union for Foreign Affairs and Security Policy and Vice-President of the European Commission in charge of a stronger Europe in the World, went to Ukraine with Eduard Heger, Slovak Prime Minister. First, they visited the city of Bucha and met with Anatoly Fedoruk, Mayor of Bucha, a few days after the Russian offensive, to observe the consequences of the violent attacks in the city, including a mass grave next to the Church of St. Andrew Pervozvannoho All Saints.

Later, Ursula von der Leyen and Josep Borrell Fontelles had a meeting with Volodymyr Zelensky, President of Ukraine. On the occasion, they gave a joint press statement reaffirming the solidarity with Ukraine and condemning the despicable Russian attacks against the civilians in Bucha. In the statement, it was also stressed out the impact of the waves of sanctions against Russia and new military, economic and humanitarian support from the European Union to Ukraine.

This visit happened in the context of the events that started on 24 February 2022, when armed conflicts began in Ukraine under the impulsion of Russia, following months of military build-up on Ukrainian borders. Ever since, condemning the military aggression perpetrated by Russia, the EU calls for a cease of hostilities, a withdrawal of its military from Ukraine and to respect the territorial integrity, sovereignty and independence of Ukraine.  Info https://audiovisual.ec.europa.eu/en/reportage/P-057240

A FRANCE - UKRAINE philatelic envelope, designed by Historiaphil© (Philately Kiosk of the European Parliament, Strasbourg, France) commemorates the highlights of this historic visit. It was produced as a continuation of the collection of philatelic envelopes testifying since 1949 to the history of Europe and its institutions. Its edition is limited to 300 numbered copies.