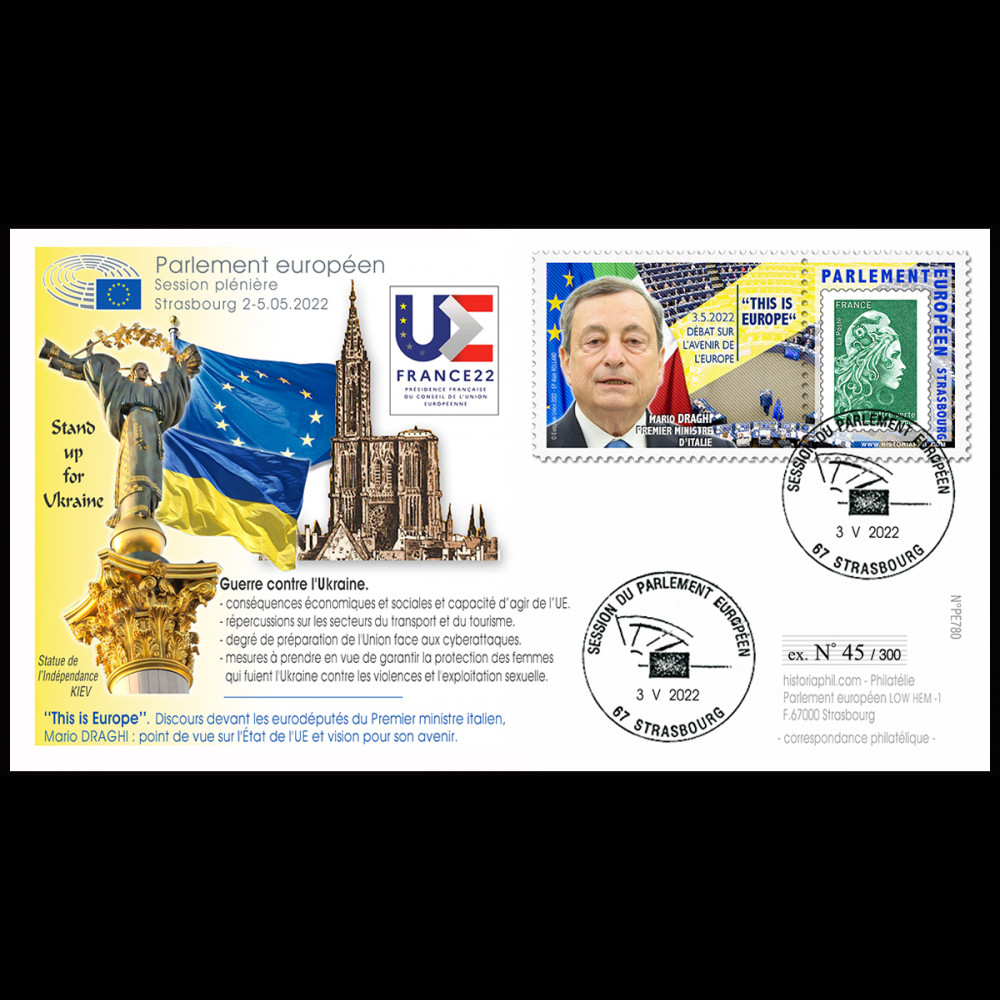 PE780: FDC European Parliament "This is Europe - Mario DRAGHI / Economic and social consequences of the War against Ukraine - PROTECTION OF WOMEN FLEEING UKRAINE"

- Plenary session in Strasbourg (France) 2-5 MAY 2022  "Debates on the WAR against UKRAINE. Economic and social consequences and the EU's ability to act. Repercussions on the transport and tourism sectors. Degree of preparation of the Union in the face of cyber-attacks. Measures to be taken in order to guarantee the protection of women fleeing Ukraine against violence and sexual exploitation"

- "THIS IS EUROPE": Debate on the future of the EU with Italian Prime Minister Mario DRAGHI

illustration: Statue of Independence of Ukraine (Kyiv), Cathedral of Strasbourg (France), flags of Europe and Ukraine, logo of the European Parliament and of the French Presidency of the Council of the European Union 2022.

Collector's Edition of only 300 numbered copies.

War against Ukraine / "This is Europe" with PM Mario DRAGHI

War against Ukraine. On Wednesday morning, MEPs will discuss how to deal with the social and economic consequences for the EU of Russia’s war in Ukraine with the Council and Commission, and how to reinforce the EU’s capacity to act. On Tuesday afternoon, they will debate the impact of the war on the EU’s transport and tourism sectors, as well as the EU’s preparedness for cyber-attacks. On Thursday, MEPs will discuss and vote on how to protect women who are fleeing Ukraine from violence and sexual exploitation.

Future of Europe. As the Conference on the Future of Europe approaches its conclusion, MEPs will assess its Plenary’s recommendations and the overall process in a debate on Tuesday afternoon. They are expected to stress that the process to change the EU’s founding documents should be activated in order to endow the EU with the competences to act on the proposed new policy areas.

Mario Draghi/This is Europe. At 11.30 on Tuesday, Italian Prime Minister Mario Draghi will address MEPs andpresent his views on the state of the EU and his vision for its future.His speech will be followed by a round of contributions from political group speakers.

Common charger. Parliament is set to give a green light to negotiations on a common charger to help reduce e-waste and make charging portable electronic devices easier. The new rules would mean consumers no longer need a new charger and cable every time they purchase a new device, and can use the same ones for all of their small and medium-sized electronic gadgets.